Most people start the new year with a resolution. Plan an exotic trip. Join the gym. Become a vegan. Learn to dance.

My New Year’s resolution is always: learn to speak French. I don’t really know why… I think I just like the way it sounds. The way they say: Hello and that even the most simple word like socks sounds beautiful: chaussette.

Every time I think about enrolling in a “Learn French” course or finding a way to teach myself via the internet I stop myself. Because I’m afraid that I might not be very good at it. I’m fearful I will never actually be able to speak French and I’m scared that maybe I won’t actually like it. And why?! Why do I want to learn to speak French!
… Because I want to. 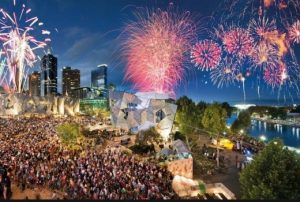 Of the 45% of people that make a New Year’s resolution only 8% will actually achieve them.

In my opinion a New Year’s resolution is just an idea that we put to ourselves so we can feel a sense of achievement. Our self-confidence improves and we our lives are more interesting by trying something new. I know I would be more interesting if I could speak French!

If I had a dollar for every time someone walked into one of my dance classes and then said to me: ‘I’ve been wanting to learn to dance for years!’

And the only thing that has stopped them (really) is the fear of failure, unfamiliarity of the environment or the most common of all reasons to not try something new: time and money. Our classes only go for an hour and it’s really not that expensive. Click here for Class pricing

One of our students at FIT2MOVE Sue, is of a mature age and she has grown up daughter who is also a dancer. Sue spent years and years sitting in the studio supporting her daughter, helping out in the studio and at competitions. Always watching her daughter dance until one day she thought:
‘Bugger it, I want to have a go!’

So she took a class and then another one and soon enough she was in the studio two or three days a week. Now Sue has private lessons and if we had an award for the most improved student she would definitely get it!

Instead of thinking: ‘I should never have done this!’ or ‘Why didn’t I do this sooner?’

Sue just loves that she made the decision to learn to dance!

Now Sue’s daughter comes and sits in the studio while she has her lesson and is the one who comes to the competitions to support her Mum.

So let’s make a deal. This year’s resolution is: I’ll learn to speak French and you learn to dance!