*A Knight dressed in white emoji*

FIT2MOVE were over the moon (pun intended) to be involved in White Night Melbourne! You could probably tell from all our social media posts, we had an absolute ball! The 5th annual event held in Melbourne brought crowds of between 550 000 and 600 000 people to the CBD last Saturday night. There were over 90 performances ranging from art installations to music performances and of course DANCE!

John Morrison and his big band played all night long (like actually all night) as 6 Swing couples participated in the dance marathon lasting 12 hours straight. The sound of the 1930’s was played through the streets of Melbourne from the Collins Street stage. The people watching on couldn’t help but dance along with the performers. Even though the spectator’s dance floor was on top of the tram tracks! It didn’t stop them from jiving along… it doesn’t get more Melbourne than that.

Check out this VIDEO of a couple aged 87 and 70 dancing along to the Big Band!

The Swing City stage kicked off at 7pm and was swinging until 7am. Collins St was jam packed with people eager to join in the fun. FIT2MOVE did what we do best having the chance to teach the Melbourne crowd how to dance! From rush hour at 9.30pm where the entire crowd moved as one Cha Cha basic. To a 4am Samba where there was more room for everyone to spin and shake their hips! It was fantastic to see so many people wanting to get involved. 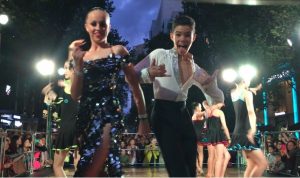 With Vic Health as the event sponsor FIT2MOVE promoted health, fitness and happiness on the Swing City Stage. It was fantastic to have studios from all over Melbourne come together for this huge event. The main objective was to promote dancing as a healthy beneficial lifestyle choice… having fun was just an added bonus.