Abbey started dancing at age nine with her family’s dance studio in Australia. Since then, Abbey has pursued a competitive career, travelling and training throughout the UK and the USA. In 2013 Abbey retired from competing and joined the Broadway hit “Burn the Floor”. Her credits include: Youth Australian Champion, Australian representative to the World Professional Championships in 2008 and “Dancing with the Stars” Australia Professional dancer.

Who you are:
I’m Thor’s personal dance instructor. Yep Thor… Well the guy who plays Thor. Chris Hemsworth. Anyway, I’ve been dancing for over twenty years as both a competitor and a performer and I have been teaching since I was sixteen years old. I love all the great stories I have and places I’ve been, but most of all I love that dancing has given me the ability to be creative, fit and artistic. I’ve lived in both the UK and the US and I’ve never, myself, paid for an International flight. Never! Even though I’ve spent the best part of the last ten years travelling. My favourite dance is the Jive and my favourite song is Whitney Houston “I wanna dance with somebody… (Who loves me)”.

How did you start dancing?
I started dancing because I grew up in a dance studio, and instead of doing my homework on the uncomfortable wooden floor I thought my time would be better spent dancing and I wanted to see if I was any good… Turns out, I was pretty good. My Mum opened her studio in Ballarat when I was nine years old and by the time I was nine and a half, the only thing I wanted to do was dance.

Your most memorable moment?
Other than the time I walked on to the floor at practice without any knickers on, the most memorable moment for me is the first time I walked down the stairs at the Australian Championships. I had watched so many video’s, on repeat, of all my idols making an Australian final and now I was finally walking down the stairs and into to the final myself. The only thing was that I was also interviewed by the local 6pm News the following week, and as I recalled the moment on camera I blushed and giggled… a lot. Afterwards my older sister mocked me endlessly and I haven’t been on the local news since.
What made you want to run and hide?
One time during a show with Burn the Floor I was showing off to my friend Lauren, who was also in the cast. I was going to town because it was a full house and then, I slipped. Before I know it I’m on my hands and knees in the middle of the stage and I know I have to get out of the way of the couple coming through behind me so they can do their solo. But the only thing I could do was crawl all the way into the wing. If I could have ran and hid, I would have! I was so embarrassed, but it gave everyone a laugh and I won the show that night!

Achievements
*Burn the Floor – Cast member 2014 & 2015
*Dancing with the Stars – Season 5 (this is when I danced with Thor!)
* World Professional Latin Championships 2008 – Australian representative 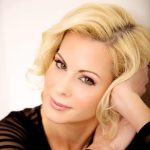 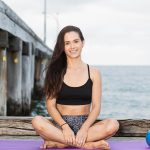